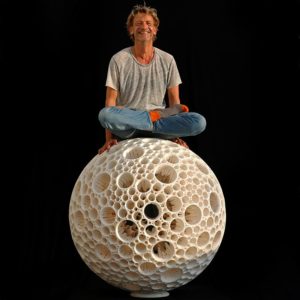 The main inspiration and motivation of my work as a sculptor, is the deep desire to disentangle the true nature of form. Where does form come from and why does it mysteriously manifest in a certain way, following a sacred, hidden pattern, tangible in the whole Universe, both in micro and macro structures of all the elements? That is the core question, propelling my lifelong artistic research.

At the beginning of my career I was very much inspired by both, nature itself and other artists inspired by nature, such as Henry Moore, Max Ernst and Jean Arp. I was also fascinated by the approach used by Ernst and Arp, which is called the Free Association: By clearing the mind and looking at the chaos in a contemplative way, one is enabled to get a glimpse of the essence or “truth” beyond reality and translate it intuitively into an inspired artwork, avoiding the ratio and the planning of the mind, which could lead to “artificial” results. The theory of Plato’s Universe of ideas says that beyond our world of illusion, imperfection, impurities and changes, which is our material world, there is a real world of forms, where perfection, beauty and truth always existed and eternally will exist as a concept. I see it as my artistic challenge to approach these eternal qualities as much as possible and transcribe them into matter. Some 30 years ago, I first heard about the concept, that form follows sound and frequencies, in Joachim E. Berendts Book “The World is Sound”. I was very impressed by his theory, which explains that any form on Earth is created by sound and also that all the planets in our solar system are tuned, following the exact frequency and proportions of the 7 tones in our music scale.

The reasons I started with the Planet Series were the following:

In the first place I was tired of having a square block as a starting point to sculpture and secondly I discovered the work of Ernst Hackel about the art forms of the ocean, especially the diatoms. With their exquisitely beautiful silica shells, diatoms are among the most fascinating and inspiring micro fossils/micro structures. Some rocks are formed almost entirely of fossil diatoms and curiously, not only symbolically, become my raw material to work on. As I started with the Planets and the other sculptures, using the diamond hollow drill as a main sculpting tool, my sculptures became much lighter, more transparent, and each time more intuitive. The working process is now less planned and more like an improvisation of a musician. It is also more fun. My goal now is trying to transform consciousness directly into matter. I imagine the planet sculptures as a frozen 3D Image of the Universe, microseconds after its own creation (Big Bang), driven by the force of sound. I imagine the materialisation of the eternal sacred pattern, the so-called cosmic consciousness, into matter and form. ‘Emptiness is Form. Form is emptiness’.